When it comes to board game design there is no substitute for human playtesting, but for simple balancing exercises with many variables, there is an alternative...

Forest of Fate is by no means a complicated game, but trying to anticipate how players and rules will interact throughout the course of an entire session is an almost impossible task to carry out in your head. The usual (and still, I think, the best) solution to this is playtesting. Put the idea in front of real players and see how it turns out.

Early in Forest of Fate's development I only had access to a limited pool of testers, and I was keen to avoid burnout. Of course you can always test your games on yourself, but even that takes time. With the concept still in a state of flux and a full-time day job, that was a luxury I didn't have.

Fake it till you make it

As a programmer by trade, I quickly set about encoding the rules of the game in a simple application. I added a sprinkling of AI and some analytics, and watched to see how things would play out. The result was a simulator capable of running 100,000 games in approximately three seconds - what would likely take me several months sat in my office.

And here's the result: 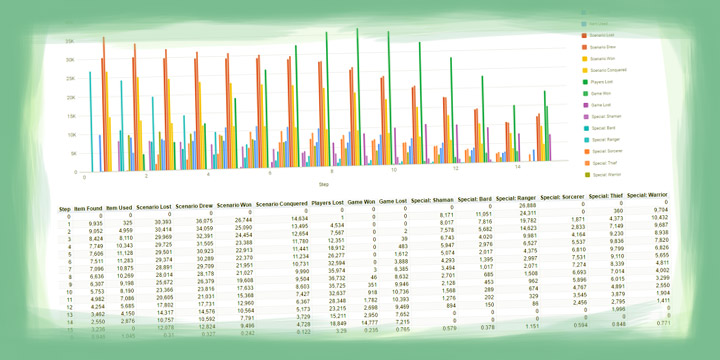 The chart you see records events throughout the game such as:

Each of these is important to balancing the game. Items have to be useful, and frequent enough that they can actually be used, but not so powerful they make things too easy (see the previous post for an example of how the rules have evolved based on the results). Players shouldn't be lost too early, or they'll quickly get bored - a learning point from human playtesting. Each character should get plenty of opportunities to use their unique ability, but no individual character's ability should be significantly more powerful than the rest. And, most importantly, winning shouldn't be too easy! I've done a lot of research on this, and the consensus for cooperative games seems to be around the 25% win mark. If you disagree, please get in touch!

Now that I have the simulator, I can also tweak rules to see what impact they might have on the game. For example, should healing potions provide three health points or five? Should players be able to heal one another, or just themselves? Being able to quickly implement these changes and see the stats change has been absolutely invaluable. Bayes would be proud!

It was really quite surprising to see how seemingly simple changes could have a dramatic impact on the overall win ratio, and equally how dramatic changes could have no impact at all! This is a fantastic tool to have in your belt. It gave me the confidence to go ahead and make rule changes that make the game more fun, knowing that they won't horribly break the game.

Scoring an 'F' on the Turing test

Now for a few caveats. Firstly, as I said in the beginning, this is not a substitute for proper human playtesting. My basic, deterministic AI is no match for a real player, who's able to use strategy and negotiation in a way that, whilst it can be simulated, is more difficult by several orders of magnitude - and way beyond my current skills as a programmer.

I see the simulator as one tool in my belt, specifically to help with balancing problems that might otherwise take me many solo playthroughs to spot - and even then could be missed. It's important to recognise the limits of any tool, and to avoid falling into the trap of believing that any simulation represents the real world: it doesn't.

At best this is a naive approximation of the game, played out for eternity by predictable morons. I hope when you get to play the real thing, in the real world, you'll agree it's more fun than that.

If you'd like help developing a similar simulator for your game, you can get in touch with me at BoardGameGeek or email me at phil@fate.cards.