What's in its pocketses?

The darkness approaches, your heart pounds in your chest. Time is running out. Your head is half-buried in you pack as you search desperately for that one item that might just change your fate...

I've always imagined items to be a really important part of Forest of Fate. They provide so many chances for interactions and outcomes that would never have come up otherwise. The idea of finding things "along the way" and putting them to use later is also great for cementing a narrative thread. Think back to all the films you've seen where some innocuous item the hero pockets at some point during the second act saves the day in the finale.

The way items are implemented in Forest of Fate has evolved along with the rest of the game. Initially they were provided as cards, which you would acquire just by drawing them. If you had the right item when you reached a particular scenario then you could choose to use that item instead of taking an action, in which case it stood a chance of breaking, meaning you couldn't use it again.

There were at least two problems with this approach:

Instead of simply finding items, you now have to win them. Each scenario is paired with one item that can be used to bypass it, and another item that you stand to gain by conquering it. In this way they act as a kind of antidote to all the bad stuff that will inevitably happen to you when you fail. In testing this is also great at sewing a false sense of hope among the party - how thematic!

Whenever you gain an item you also get a detailed account of how you came to possess it, in the form of the outcome text. Giving an item a backstory based on your choices helps it feel personal, makes it more memorable and might even cause you to think twice before throwing it off a cliff (or not).

So without further ado here's the full set of items you may come across whilst wandering the Forest, as it currently stands: 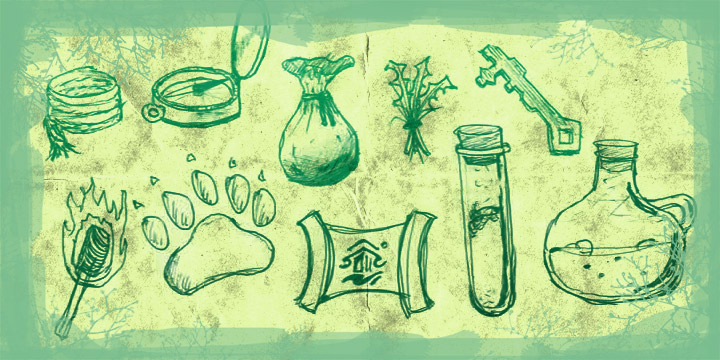 Notice there are no traditional weapons here. While there are many dangers in the Forest that will force you to defend yourself - and you can choose to take a more aggressive approach - combat does not play much of a role, and this is very much an intentional part of the design.

Coming up with so many uses for each of these has been a real creative challenge, and I really hope you enjoy the extra dimension they add to the game. That is, if you can find one...