Where's a Mechanic When You Need One?

Even though Forest of Fate is still in development, practically all of the rules and gameplay elements are already in place. Until the rulebook is ready, here's a quick overview of how the game works.

Players are placed in a survival situation from the outset. Teamwork and negotiation are critical, but ultimately each player's fate is decided by their own individual actions. We've worked hard to ensure that luck plays no part.

Play follows a semi-cooperative or "indepenent cooperative" style, meaning that any combination of none, one, some or all players might be declared winners at the end of the game. You can also play solo, but we don't think that's as much fun as playing with friends - social interaction is a big part of the game.

First each player selects one or more characters*. Each character comes with a predefined set of skills and a unique ability designed to help them survive. Once everyone has chosen a character you can form a party, and together plot a route from the heart of the Forest to your friendly local tavern, The Finishing Post. Once a route is decided it becomes locked in, and the journey home begins.

* For example, two players can choose two or even three characters each for a longer game.

To start with the party have a shared goal - to make it out of the Forest alive. However, just as in real life, sometimes you might find that individual priorities conflict (particularly if you have any sense of self-preservation).

On each turn you will encounter a different deadly scenario blocking your path, and decide who among you should take on that scenario. The nominated player then chooses their approach from a set of skills such as force, guile, wisdom etc. If they are successful they stand a chance to win an item, which might be useful to the party later on. If they fail they lose vital life points. As you would expect, losing all your life points is not a good thing. 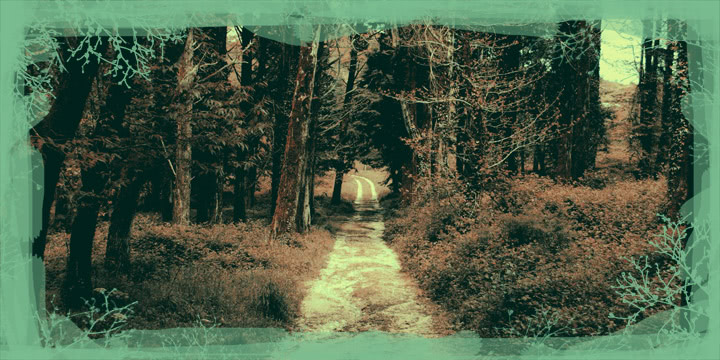 If you lose all your life points your soul is captured by the Forest, and you eventually become a shade. Think of this as an evil version of your former self, except it's a natural kind of evil that's not your fault and you're not really in control of.

Your mission as a shade is to prevent the survivors from leaving the Forest. You can't harm the party directly in your spectral form, but you can influence the outcome of events using your character's shade ability. Again, this is a negative version of your regular ability, which can only be used if you can correctly anticipate the approach the party will take next.

You can also play without shades, if you prefer, which makes the game slightly easier and with less conflict - some players might want to play their first game this way (this is also how solo play works).

The adventure continues in this way: the Forest and the shades attempt to eliminate everyone, while the survivors defend their dwindling party using abilities, items and (mostly) good choices. All the while an enthralling one-off narrative builds in the background based on the dark, but colourful and often humerous narration of each character's actions and their consequences.

Any players that make it back to the Finishing Post win together. If nobody makes it back either nobody wins or the shades win (if you're playing with them).

While many aspects of the game are totally unique (as far as I'm aware) simplicity is very important to me, and I've been careful throughout the whole design process to put fun before rules (you can read why in my previous post). What remains is quick to learn and easy to remember.

From the way the path is set at the beginning of the game, to the way skills and approaches are resolved into outcomes, many of the mechanics used have been created specifically to address design challenges faced by Forest of Fate. How do you get the player to transparently process over a thousand unique outcomes, without even realising they're doing it? How do you go about compressing all that information onto a regular playing card?

This, and more, will be revealed in our next post...