The Seeds of the Forest

Your party have already come so far: you've penetrated the magical barrier and fought your way into the uncharted depths of the mysterious Forest to defeat the forces of evil. Now you are weary, you're weakened, and you're a long way from home.

As you stand shoulder-to-shoulder with your companions, turning over the treasure in your hand, your heart is suddenly filled with a new desire. You imagine the warmth of the fire against your face and the clinking of glasses, and for a moment you are transported back to The Finishing Post. You look out over the endless treetops and can almost picture, far in the distance, the smoke rising from its wonkey chimney and, just beyond, your home. You let out a sigh as your mind returns to the dangers still lurking between you and your new goal.

The quest may be complete, but your journey has only just begun.

The Beginning of an Idea

I've always felt that the journey home is the most under-appreciated part of any quest. Whether it's the movie montage or taking the "fast travel" option in your favourite video game, the peril on the way in just seems disproportionate to the peril on the way out. And let's face it, we're not all BBFs with the eagle-lords.

I'm not claiming to be the first to tackle the trope of the boring return journey, just that I find this often-untold element of the story interesting. What better way to explore it than in the traditional form of a tabletop game.

This wasn't the first time I'd thought of making a card game. The first evolved unexpectedly from a silly pun game I would play with a particular group of friends whenever we had a get together. It went something like this: think of two categories, then think of a wordge (a "merged word") that spans both categories. For example, given the categories "breakfast cereal" and "modes of transportation" one might say "helicocopopter". Given "politicans" and "toys & games" one might say "Nickleggo".*

* If this sounds awful, that's because it truly is. I do not recommend you attempt to play this with anyone you love. Essentially you're creating hours of awkward silence punctuated by the occasional groan-worthy play on words. In the end I got a few copies printed on miniature cards as the ultimate in-joke, and that was that.

Fast-forward six months, and the idea of a storytelling survival adventure came to me whilst listening to an episode of the One Shot podcast (highly recommended). I remember listening to the hosts riffing off one another in a way that could never be scripted, and it sounded like the most fun! I've never played a roleplaying game, so my first instinct was "I want to do that, but it must be really hard."

As time passed I thought about it some more, and I realised there really wasn't that much to it. Sure there are lots of rules and mechanics, but I quickly decided that for me, that's not even the fun part. What I wanted was improvisation, character interaction and storytelling - and I bet I could pull it off, too.

To prove it I challenged myself to hosting a fantasy-themed New Years party based around a D&D type adventure. Everyone was into Stranger Things at the time, so nobody took much convincing. Needless to say all twelve of us had a brilliant time, and the seed of imagination was firmly planted from then on. 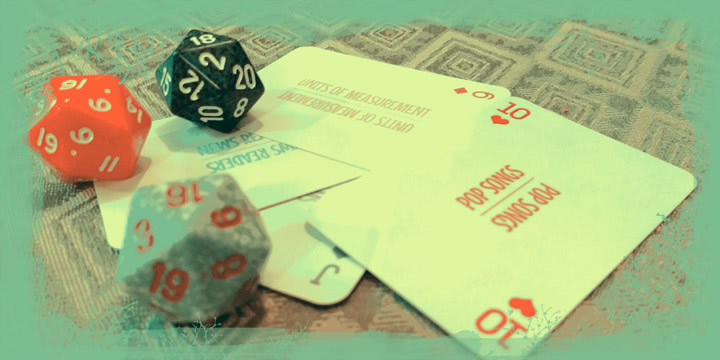 Getting card games professionally printed was easier than I'd thought, and so was distilling the spirit of roleplaying into something accessible to everyone. As these elements came together to form the initial idea it felt organic, but also alien. Like some careless squirrel had tucked away this precious acorn many winters ago. Finally it had started to sprout - and only I was there to see it.

With the roots digging deeper it felt inevitable that this thing was going to happen. I decided to give myself all the permission I needed to let it, and I've been on this journey ever since. Just like the adventurers emerging from the dunegon we have a long road ahead of us. There will be obstacles and setbacks, though hopefully nobody will lose any limbs along the way.