By far one of the greatest design challenges I've encountered in creating Forest of Fate is processing the massive amount of immersive narrative that needs to be presented to the players.

Forest of Fate is a story-driven game, and whilst imagination is very important I want to make sure that I'm giving you enough of a mental image to at least get you started. This is achieved via the flavour text that comes with the game. This text describes the unexpected actions you might take when you choose an approach, as well as the (often terrible) consequences of those actions.

I'd known from the beginning that this wasn't going to be easy, but I was determined to retain the story element from the improvisational roleplaying games that had inspired me. To begin with I was working with the following criteria in mind:

Also, regarding the actual mechanics of the system:

From the beginning I'd planned on including around 36 scenarios in the initial game, with the possibility of adding more in future expansions. Do the maths based on those numbers (36 scenarios x 6 approaches plus the same number again x 4 outcomes, all multipled by 50 words each) and what began as a modest card game quickly turns into a short novel (~54,000 words).

My gut reaction was to cram as much text onto the cards as I could. When I fit as much as I could on the front, I turned them over and used the backs as well (at the time it didn't matter if a player could figure out what card was coming next, but today it does). When that wasn't enough I made the font smaller. After that I made the cards bigger, stepping up from regular poker cards to tarot size. Then I made the font smaller again.

Then came the eureka moment - what if I could double up on space by printing over the top of existing text? I had a pair of old-school 3D glasses sitting on my desk at the time, and realised the red and blue filters would be perfect. I mocked up a prototype using some cheap acetate from eBay and it actually worked pretty well. Both sets of text were readable, but still kind of small. So I got back online and picked up some fresnel lenses (imagine a credit-card sized bendy plastic magnifying glass, it's every bit as awesome as it sounds). 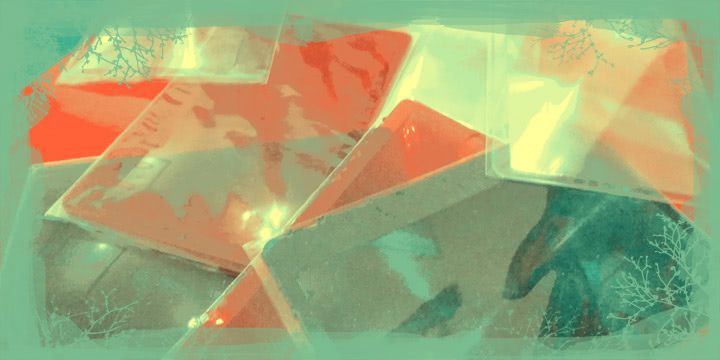 The plan at this point was to fix the acetate to the lenses, to serve as a kind of "viewer" for the scenario cards. The game would "know" which character you were playing by overlaying the scenario with a series of holes punched in your character card. Together, this gave me all the information I needed to resolve the outcome. Phew!

I realised late in the process that I would have to compromise on the number of approaches (just one for red, "aggressive" and one for blue, "cautious"), but the overlaying technique still allowed me to get a full 8 outcomes for each scenario - way more than I was hoping for.

When it came to playtesting the system, it didn't go well. As I suspected, 2 approaches just wasn't enough for the player to feel like they were in control - and it was clear the overlay/filter combination would be way too difficult for new players to grasp. Even though it was cool and original, even though it worked, as I sat staring at the mess of acetate and punchcards strewn over the table I knew I had to rethink my options.

I took some time out to get some more writing done, and when I came back to the problem I quickly settled on a different compromise - one which I believed had the least potential to impact fun and playability. Instead of printing text onto the cards, I would instead print numbers that marked the relevant piece of text in a reference guide. At first I hated the idea - scanning through a booklet is my absolute least favourite part of games like 221B Baker Street - but at the time it seemed like the lesser of many, many evils that stood in the way of making Forest of Fate the game it is today.

Since then I've come to terms with the idea, and the plan is that the reference manual will be made available in both print-and-play and digital formats to overcome some of those concerns.

I'm a big fan of trees, as you may be able to tell, so I won't be including a full printed copy of the story book with each game. This also allows me to keep prices low and make the game more portable by reducing the box size (I also happen to think that the slick interface of digital version will play better, but it's some time before I'll be able to test that theory). All that aside I appreciate you might simply prefer a traditional printed format, so that option will always be there.

The final chapters of this story are still unfolding, but if you have any thoughts about what you've read so far I'd love to hear from you. You can email me at phil@fate.cards, or send us a Tweet with your comments.